The painting and fix ups are coming along. I think it may be early next week before we get the house listed. We also have to replace the sink and faucets in the main bathroom. I spent a little over 2 hours outside today pressure washing the siding and patio. Now my knees are killing me. I knew they would be, that was way too long for me to be standing like that. Oh well, I get 2 new knees in just over a week :)

Below is my Tim Holtz configuration box. Oh my heavens, I adore these things!!! They are so much fun to work with and there are so many things you can do with them. I was skeptical at first that I could make it "work" but I have to say that I am very, very pleased with how it turned out. I got lots of very nice comments from my friends at ACOT which is where I get my inspiration and motivation. Also my sister's reaction when she saw it was awesome. She absolutely loves it, it was like she was in awe. She doesn't get like that over just anything. That made me happy.

So then there is hockey. My poor Vancouver Canucks are not doing well. This is the night they could take home the Stanley Cup but instead they are losing 4-0. I don't see them winning this one. So it will be back to Vancouver to play on Wednesday night. Oh my nerves!!!! Hubby went to bed after the first 2 goals were scored, so he never got the email from his brother telling us that their baby arrived today, 2 weeks early!!!! Alessandro (his Mom is Italian) weighed only 5 pounds but he is perfect!!!! Thank heavens. They had a scare early in the pregnancy when they were told that the baby may have some problems. So I look forward to lots and lots of pics of the babe as I have no idea when we will see him as they live in London, England.

So here is the configuration box. I call it my Steampunk shadowbox as I used all graphic 45 Steampunk Debutante papers. I wish I could afford a new lens for my camera but right now, it's going to be awhile before I can get one. So for now, I am taking pictures with my Blackberry, so these are not great pictures. 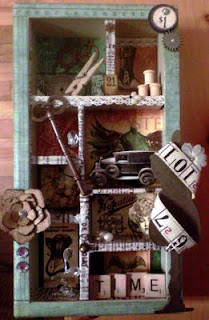 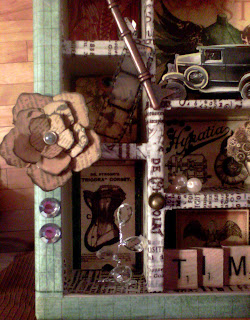 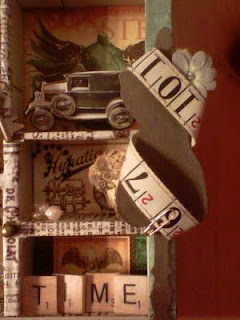 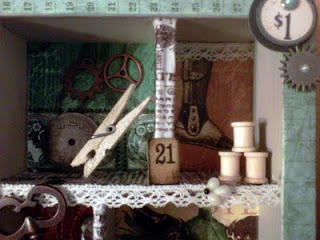 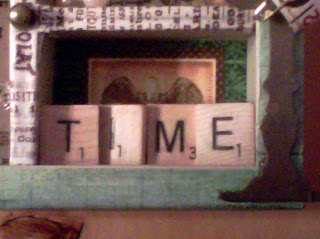 Posted by Darlene Whalley at 11:12 PM